Eight years after graduating from the University of the Witwatersrand with a law degree, Karabelo is still hopeful of landing a job, although his prospects are not particularly bright.

Now back home in KwaNdebele, not far from Pretoria, he cannot afford to access the internet and so buys the newspaper, which he scours for the ad that might change his life. “The challenge of being unemployed is that you are a cohort of the forgotten,” says Karabo, barely hiding his desperation. “I resorted to furthering my studies but the outlook has not changed, even after that. It is work experience that I need.”

The 28-year-old is caught up in a classic Catch-22 scenario faced by many educated young people: he cannot find work because he has no experience and he cannot get experience without a job. Karabo is now back in the village where he grew up, far from the bustle of Gauteng which, as SA’s economic hub, presents him with better chances of finding work.

SA’s unemployment rate stands at 26.5% and, at 31.2%, is even higher among the youth. Graduates make up 7% of this number, according to Statistics SA’s fourth-quarter 2016 labour force survey. The need for work-ready programmes has been identified by the government, leading to the partial introduction of the youth wage subsidy or tax incentive scheme in 2014.

The presidency says public employment programmes created more than a million work opportunities in the 2014-15 financial year. A study commissioned by the Development Bank of SA in 2010 found that a young South African who gets and keeps their first job for 12 months or more, has an 85% chance of being employed for the rest of their lives. Janet Jobson, a youth innovation director at the DG Murray Trust, says young people tend to miss that first step of getting their foot into the workplace.

Mismatches in the market abound, characterised by a lack of information that guides and coaches young people through the process of looking and finding a work opportunity as soon after school as possible. Jobson says that while there is both a hard- and soft-skills gap in the country, young people also don’t know “how to have” a job, which largely consists of the soft skills needed in a workplace environment.

These include communication skills, workplace etiquette, and sector-specific numeracy and literacy skills. The trust consequently launched JobStarter, a platform that aims to create a mechanism to overcome the structural barriers of information, learning and linkages. “It is effectively a career coach in your pocket,” Jobson says.

Through a series of courses a candidate gets coached through the employment process. On completion, the candidate’s profile becomes Independent Institute of Education director Felicity Coughlan says that while in certain fields having some hard skills makes it easier to get employed, what employers are looking for is mostly what students don’t realise while they are studying.

This includes the ability to show persistence, to communicate and to make a good argument. Students’ participation in part-time work and involvement in student leadership are just some of the attributes that employers look out for on CVs. “Not all LLB graduates will get to do their articles in good law firms,” rather, it is those who participated in law clinics at varsity or in student leadership opportunities that stand a better chance, “even though they may have failed a few courses along the way”, Coughlan says. She also refers to some simple things that young people need to do to prove they have certain skills, besides their qualification: “If you get a job, for example, how do you keep it?”

However, technology group EOH believes that job creation is primarily the responsibility of business while government’s role is to create the environment and incentives for business to thrive and so help create jobs. In 2012, the company launched an initiative with the aim of stimulating job creation through the promotion of internships and training programmes.

EOH CEO Asher Bohbot says the initiative’s main aim is to lower the number of unemployed youth by opening up their doors to the much-needed on-the-job, workplace experience. This year, up to 600 interns and graduates were taken on to be equipped with work-readiness skills so they are better positioned for a permanent position. EOH then places them across their entire business, allowing them to work as developers, financial assistants and marketers, among other things. Bohbot says if EOH cannot absorb the learner, its business partners and customers are encouraged to do so. For Karabelo, a cadet programme he participated in with the Department of International Relations and Co-operation appears to have done little to add to his employment prospects. He is looking for any other that could allow him to eventually practise law: “Ja, if you hear of them please send them through because I have an e-mail address.” 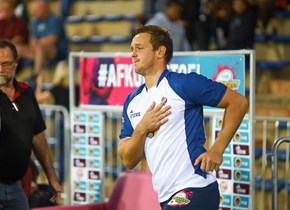 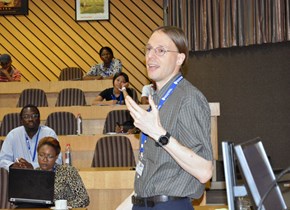 
Internet of Things (IoT) is known to operate in an open environment making it vulnerable to various security... 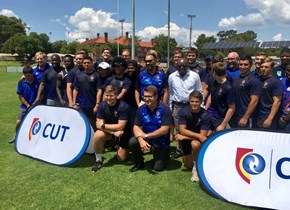 It is the beginning of the University Rugby season


It is the beginning of the university rugby season and teams are preparing hard to start the league on...